All our leaders have a strong background in conservation, many having worked for the Royal Society for the Protection of Birds. All are experienced in guiding and have an essential good sense of humour! 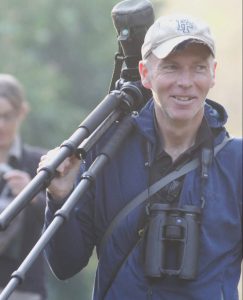 CHRIS TOWNEND
Chris is the company owner of Wise Birding Holidays Ltd and lives in Devon with his partner Helen. When not overseas, he is often to be found on his local patch, the Otter Estuary looking for something unusual. Chris has travelled throughout Europe, North and South America, Asia and his favourite continent, Africa, all following his birding interest, as well as wildlife and conservation. Chris was employed by the RSPB for 7 years and based at the RSPB’s HQ at Sandy for most of that time, in species protection. Here he was part of a team working to combat bird of prey persecution, illegal trade in birds and egg collecting. He then moved to Devon and worked on cirl buntings for 3 years including a year spent managing the cirl bunting re-introduction project.

Now, Chris works full time as a guide for Wise Birding Holidays as well as taking time to develop new itineraries and grow the business. He has led  birding holidays during the last 20 years. His first passion is birds, but this is closely followed by mammals, particularly the cats! He is a people person keen to share knowledge and ensure that bird tours are full of wildlife, humour and good quality cakes and puddings! 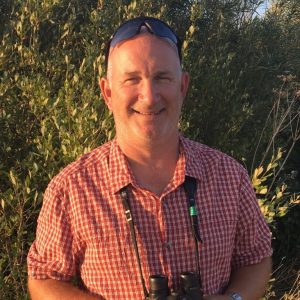 STU ELSOM
Stu is a professional ecologist – Stuart Elsom Ecology, a tour leader and wildlife photographer based in Cambridgeshire.
Stu has been a keen naturalist from an early age and has had a lifelong interest in birds and insects which has taken him to over 50 countries on six continents. Recently he has specialised in the birds of the New World with the avifauna of North and South America, and The Caribbean. Stu is an enthusiastic wildlife photographer and a member of the Royal Photographic Society Nature Group, where he was awarded his Licentiate Distinction (LRPS) in 2012. Over 800 of his images have appeared in natural history journals, magazines, CD guides and books. While birds are Stu’s main focus he also has a huge interest in insects, especially butterflies, moths, dragonflies, damselflies and more recently, hoverflies. We are very pleased to have Stu leading for us. His years of experience in guiding and easy going approach fit perfectly to the growing Wise Birding team. 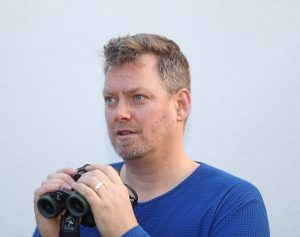 JAMES LOWEN
James has been immersed in all aspects of natural history since he was able to walk, encouraging him to moult into a fully fledged wildlife writer, editor, guide, consultant and photographer. James is a multi-award-winning author writing about wildlife travel and natural history. His books include Pantanal Wildlife, a top-selling travel guide to Brazil’s great wetland where he will be leading our Pantanal Tour in September 2020. James is a top wildlife guide with a wealth of knowledge about birds, mammals and insects. He spent several years leading wildlife tours in South America and Antarctica. He is a very easy going guide with bags of enthusiasm and you could not be in better hands for our relaxed Pantanal tour. We are thrilled to have James join our growing team of leaders. 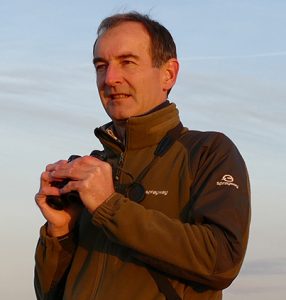 MIKE LANGMAN
Mike is well known as a bird illustrator, Devon County Recorder (1996-2002), tour leader and avid Devon birder. His fabulous illustrations can be seen in almost every RSPB reserve from identification cards to large murals. Mike worked for the RSPB for nine years after leaving Art College. His interpretation work for nature centre information boards can be found across Britain and in Europe. Much of Mike’s work can also be found in numerous international bird books and magazines. Mike spends much of his free time birding, particularly Berry Head in Devon where he spends many hundreds of hours seawatching and searching for migrants. His numerous hours in the field have been rewarded with many good finds that include Sardinian Warbler, Little Shearwater and Britain’s first Yelkouan Shearwater! Mike has a very approachable character and he is always very willing to help others improve their birding skills and knowledge. These traits along with his exceptional field skills will be a great asset to the Wise Birding team. 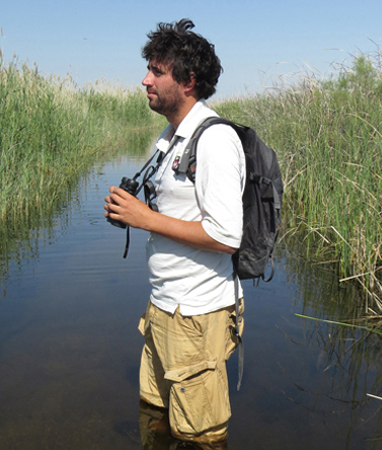 RYAN IRVINE
Ryan lives in east Norfolk and has recently become a freelance ornithological consultant having previously worked for an offshore company leading ornithological surveys for renewables projects. Prior to this Ryan worked for the RSPB in various roles in Wales, Scotland and Cornwall over a six year period.

Ryan is a member of the Norfolk Bird Recording Council and when he isn’t working he will be on his patch in East Norfolk. Patch birding is a real passion of his that ultimately led him to become a co-founder of the very popular Patchwork Challenge, the largest birding competition in the world. Ryan has found some exciting birds on his patch including Red-flanked Bluetail and Red-footed Falcon. He has travelled extensively across the world through work and  birding holidays. Though a bird specialist, Ryan is also very interested in mammals too. He is very experienced in cetacean identification as a result of his offshore work. Ryan has led tours for us to Sri Lanka,  Turkey and Chile and is becoming a favourite with many of our clients. He will be leading many new tours for us in 2020. 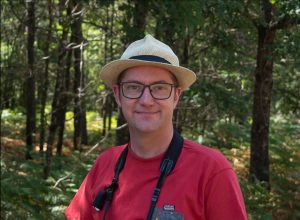 STEVE BLAIN
Steve lives in Bedfordshire and works for the RSPB. He previously worked as a bird guide in Ecuador for two years based in Quito with his regular patch being the wonderful Tandayapa valley on the west slope of the Andes. He has travelled widely over five continents in search of the weird and wonderful, with South America stealing a special place in his heart for its incredible biodiversity. He has been the County Bird Recorder for Bedfordshire for a number of years and enjoys local patch birding. Steve also enjoys digiscoping and photography and is also hooked on sound recording and ‘nocmig’ (recording calling migrants at night). Although a birder at heart, Steve also enjoys ogling orchids, tickling taruantulas, inspecting insects and seeking out rare cats whenever possible. We hope Steve will lead our Ecuador tour during 2020. 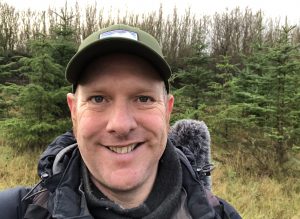 MARK LEWIS
Mark works in seabird monitoring based in Aberdeen, where he manages a citizen science program that collects data on seabirds and cetaceans from ferries. Prior to this, he spent several years as a bird surveyor specialising in offshore bird and mammal surveys and before that he was a chef. Mark is a keen patch birder at Girdle Ness, though he has other patches that he visits regularly, including Sanday in Orkney, the island of Ouessant, Brittany, and the French Pyrenees. Mark’s interests include looking for rare birds, seawatching, and sound recording. He also enjoys cetaceans and butterflies. Along with Ryan Irvine he co-founded Patchwork Challenge, a patch birding competition and community. Mark is also a member of the Scottish, NE Scotland and Upper Forth rarities committees. 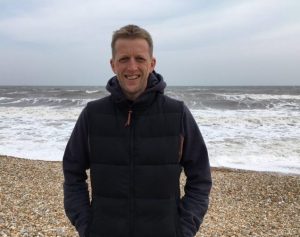 ANDY FOSTER
Andy fell in love with Brazil during his first visit there in 1995. After numerous visits over the years Andy set up Serra dos Tucanos Lodge together with his wife Cristina. Serra dos Tucanos Lodge ran for 14 years until they moved  to their new base Itororo Lodge. Andy previously worked at a nature reserve on the south coast of England where he was based in the field and was responsible for bird and botanical surveys. Back in Brazil, Andy assisted with the establishment of a local wetland reserve and conservation NGO based in the State of Rio de Janeiro. This then motivated him to establish Serra dos Tucanos lodge. Having now spent over 20 years birding within the Tres Picos State Park in the state of Rio de Janeiro, Andy knows the area incredibly well and has spent numerous hours in the field guiding birding trips and sharing his knowledge with many guests. 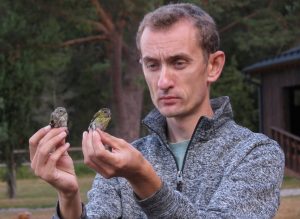 TARVO VALKER
Tarvo started birding at the age of eight and has been passionate about his hobby ever since. After working as a monitoring specialist at Silma Nature Reserve in Estonia, he decided to become a freelancer. Now, he is actively involved in bird surveys, wildlife guiding and nature education. Tarvo has been a long term council member of Birdlife Estonia and he sits on the Estonian Rarities Committee. Although a birder, Tarvo is also keen on mammals; especially the elusive Eurasian Lynx! He has guided many bird and mammal trips for 15 years and is one of the most experienced guides in Estonia. Tarvo loves all wildlife and enjoys sharing it with others. His huge field experience, friendly personality and good humour always make trips enjoyable and we our pleased to have Tarvo on our team. 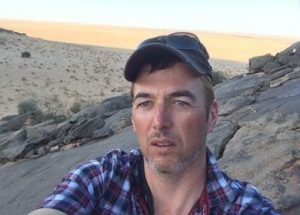 RICHARD MOORES
Richard is a first class bird and mammal man working for a leading Ecological Consultancy, Biome Consulting. We are very pleased to have Richard as part of the Wise Birding team and he will lead some tours to the Western Sahara. In Richard’s own words “If it has got fur or feathers then I’m basically interested! I developed my zeal for ecology during many a formative hour trailing his gamekeeping father around the south Shropshire countryside. Whilst mammals have become a dedication, birds will always retain my devotion with migration and waders a real affection of mine. Happy in the Saharan Desert or an Estonian forest, if there’s a glimmer of hope of seeing something incredible, I will be at the head of the queue!’ 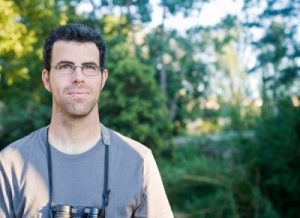 Dani lives in Huesca, close to the Central Spanish Pyrennees, where his interest for nature and wildlife began at a very early age. He spent two years working on Steppe bird surveys focused on habitat management and conservation. This included both species of sandgrouse and bustards as well as Lesser Kestrels in the Ebro Steppes. He also worked as a forest ranger in the Pyrenees and Cinca River valley. More recently Dani has been giving environmental education talks for children and adults focusing on bird ecology and migration; something he is very passionate about. Dani also has a passion for bird photography. He has travelled throughout Europe as well as Africa, with several visits to his favourite country Morocco. Like Chris, Dani has a fondness for good puddings!